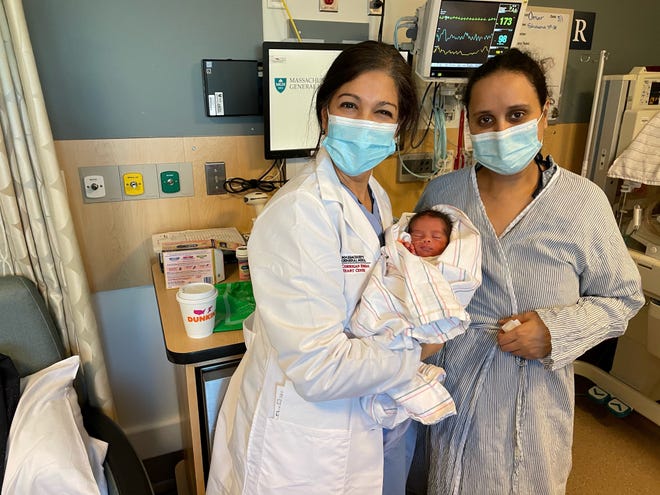 Congenital heart defect patients, such as Saida Rizki of Shrewsbury who has experienced breathing problems and low oxygen levels throughout her life, can live a normal life, except during pregnancy when they might have difficulty giving birth.

But with the help of doctors at Massachusetts General Hospital in Boston and a charitable organization that helps support patients with CHDs — the Heartfelt Dreams Foundation in Southern New Hampshire — Rizki gave birth to her first healthy baby in February, receiving care and support from the foundation before, during and after the birth.

“I must thank the Heartfelt Dreams Foundation for all the support it provided to me and my husband, as it gave my husband a free hotel stay during my stay in the hospital,” Rizki, 31, said. “In addition, we found them caring and they always call the doctor and rush to help and we thank them again for all they have done for us.”

Rizki was born with a CHD. She can live her life normally, but before getting pregnant she had to go through surgery to close the two holes in her heart.

A leaky heart valve is the main complication Rizki faced before delivery, she said, which increased in the seventh month of her pregnancy, leading to shortness of breath and an increased heart rate.

“Because the baby can’t survive with my low oxygen and will be dangerous in my life, too,” she said.

Yet, the heart care from cardiologists at UMass Memorial Medical Center and MGH contributed to the continuation and success of the pregnancy, she said.

Additionally, with help from Heartfelt Dreams, Rizki said, she and her husband felt more at ease, allowing them to focus on pregnancy and childbirth.

“It would be difficult if we didn’t get support from them,” Rizki said. “We also received a birthday gift from them, and we had an audio and video chat with the foundation via Skype, and we were pleased to have the honor of getting to know them and thanking them for their help, both material and psychological.”

The two people behind the foundation are Eric Ankerud, president of Heartfelt Dreams, and his wife, Lori Ankerud, who is a CHD patient herself. They have a heartwarming story to tell.

What are congenital heart defects?

Congenital heart defects are the most common form of birth defects in the U.S., occurring in almost 1% of births or nearly 40,000 babies annually, according to the Centers for Disease Control and Prevention.

Thanks to advancements in medical technology and surgical techniques, medical studies show tremendous improvements in survival rates of patients with CHDs.

Ankerud, born in the late 1950s, is now living a happy life filled with family, travel and work. But that did not seem possible more than 50 years ago, when she was born with CHD and open-heart surgery was just evolving.

Ankerud is one of the lucky ones — she was one of the first infants to undergo open-heart surgery by a group of cardiologists who were experimenting with the surgery on CHD infants.

She survived and thrived.

She has visited cardiologists regularly and has been a patient of Dr. Doreen DeFaria Yeh at MGH for almost 20 years. Rizki is also Yeh’s patient.

When Eric and Lori Ankerud got married and moved to New England, they said they were looking for a cardiologist who would know her condition well.

Later, they were introduced to a cardiologist at MGH, and over the years, they learned more about Lori’s condition, including that CHD patients need heart-reconstructive surgery or other heart surgeries depending on the medical care they received as infants or as children.

In 2015, she went through surgery to rebuild her heart. She made it through and did well through rehabilitation.

On Thanksgiving in 2019, Eric Ankerud was approached by an anesthesiologist who told him that he’d never seen anyone who had lived as long as his wife had with a CHD. He was asked by the anesthesiologist if he would consider writing a book about Lori Ankerud’s journey battling her CHD.

“That kind of dawned on me that maybe that’s what we should be doing,” Eric Ankerud said, remembering coming up with the idea when he was waiting outside an operating room for his wife’s surgery.

After receiving specialized care and treatment at MGH, the Ankeruds founded Heartfelt Dreams with a mission to support CHD patients and to raise awareness among medical communities about the condition that living a fulfilling life is possible with the right medical management.

Mission of the foundation

The couple said they hope to achieve two main missions: more support for CHD patients emotionally, educationally and financially; and also for doctors and nurses who care for those patients.

The foundation arranges video conferences with patients who have high anxiety about their condition, their upcoming surgery or how the condition could affect to their family and friends.

They also provide financial assistance including free transportation either by car or plane to hospitals, hotel accommodations without charge and financial support for what insurance may not cover.

Another important element, Eric Ankerud said, is to educate the medical community on CHDs.

Through Heartfelt Dreams, they provide live webinars where doctors and nurses give presentations on topics relevant to CHDs. The webinars are available on their website and YouTube channel as well as on MGH’s social media.

“There’s a very high level of anxiety for these patients, and part of the issue is that as these patients grow up, there will be a time in their life where they’re feeling fine, and they don’t think anything is wrong, and they tend to disregard medical care,” Eric Ankerud said.  “And then when they get older, their heart is in a situation where it’s sometimes too late for the doctors to do anything. So we want to try to prevent that through education.”

In addition to live webinars, written educational materials, symposiums and other medical conferences are available.

“As we talked to cardiologists around the country, we’ve recognized that there is a gap that needs to be (filled with) more learning,” Eric Ankerud said.  The foundation also offers financial grants to MGH to support their cardiology fellowship program. They also receive applications from across the country for an annual nursing scholarship.

“That’s our effort — to try to connect with the doctors and nurses who will be treating the congenital heart defect patients so they’re better able to diagnose and care for patients,” Eric Ankerud said.  “There are many stories that we’ve encountered not only in our own life experience but in talking to doctors and patients (on) how patients are misdiagnosed and therefore their treatment is inappropriate.”

Eric and Lori Ankerud now live a full and happy life. They have two adult children.

To learn more about support and resources for CHD patients and their families, visit heartfeltdreamsfoundation.org or the foundation’s Facebook page.

I am being discharged today! I want to Thank you, once again, for your generosity with accommodations for Beth. I am so dependent on her support when I am hospitalized that your providing a place for her while I am here is priceless to me. I would not survive if she were not here for support. I can't thank you enough.
BruceHeartfelt Dreams Foundation patient
I want to thank you again for helping my family and I through this. My mom and aunt and uncle had a great place to stay and relax while I was here in Boston this past Friday having my Pre Procedure Evaluation. These past few days have flown by and I think I am all ready for the big day, tomorrow. I feel so much better just knowing my mom and sister can be close while I am going through the surgery and recovery afterward.
OnnaHeartfelt Dreams Foundation patient
Thank you so much again for all that you are doing to help our patients, it is invaluable!
Dr. Defaria YehMassachusetts General Hospital cardiologist
First thank you so much for all the help and support you give us. My wife and baby are doing good so far thank God. Thank you again and may God bless you and your family.
MohammedHeartfelt Dreams Foundation beneficiary
We would like to start by thanking you guys for the service you are providing for Congenital Heart issues. Your Foundation is going so far to even include the future development of crucial Medical training for our care providers. We feel truly blessed.
BethHeartfelt Dreams Foundation beneficiary
When we received your note yesterday confirming reservations for my wife, I was in tears over this gesture. The secure feeling and knowledge my Wife will be able to stay with me provides a Terrific relief for me. With this in place, I am now entering this operation with a renewed sense of Faith and Peacefulness.
BruceHeartfelt Dreams Foundation patient
Thank you so much for your assistance with this! The patient’s wife will be greatly relieved to receive this news! Knowing that this is one less worry for this family right now makes my heart smile more abundantly today!
KeshiaHouston Methodist social worker
I can't tell you how much I appreciate you arranging hotel accommodations for me. It is so kind of the Foundation and much appreciated.
JaclynHeartfelt Dreams Foundation patient
There are no words to convey how grateful my husband and I are for the generosity of you and your Foundation. You have eased a great deal of stress to an already stressful upcoming surgery.
DoriHeartfelt Dreams Foundation patient
Previous
Next

Heartfelt Dreams Foundation is a 501(c)(3) non-profit charitable organization. All donations are tax-deductible to the full extent of the law. Our non-profit tax ID is 83-2964412.